Great piece from the Detroit News, tons of solid links and material here. Get stoked! The Gypsy Professor will be heading down Tuesday for more press coverage!

How Ford plans to resurrect the train station

Ford Motor Co.’s restoration of the Michigan Central Depot by 2022 would bring 5,000 employees to Detroit’s Corktown neighborhood, where the Blue Oval aims to create what it calls “the next generation” of automotive mobility.

Plans for the Corktown campus, to be announced Tuesday, would deliver 1.2 million square feet of mixed-use development spread over multiple parcels and at least three recently acquired buildings. Ford expects to move 2,500 of its employees — roughly 5 percent of its southeast Michigan workforce — to the campus, with space for an additional 2,500 entrepreneurs, technology companies and partners related to Ford’s expansion into Autos 2.0.

“It’s not just a building,” Ford Executive Chairman Bill Ford Jr. told The Detroit News in an interview at Ford World Headquarters. “It’s an amazing building, but it’s about all the connections to Detroit, to the suburbs, and the vision around developing the next generation of transportation.”

More: Ford depot purchase could give new life to symbol of Detroit’s decline

The company’s goal is to establish its Corktown site at the east end of an evolving mobility corridor evoking Michigan Avenue’s earlier road to the Arsenal of Democracy. The campus would be a critical node in a circuit running from Detroit through Ford’s Dearborn headquarters, to Detroit Metropolitan Airport and the American Center for Mobility at Willow Run, ending at University of Michigan research sites.

“This will be the biggest thing to happen in Detroit since Dan Gilbert brought Quicken down,” Mayor Mike Duggan told The News. Ford’s Corktown plan promises to bring thousands of new tax-paying jobs to the city, as well as complementary investment to satisfy growing demand in a part of town best known for bars, restaurants and coffee shops — not big business.

Michigan Central Depot would be a “magnet” on that corridor, CEO Jim Hackett said, attracting a new kind of automotive talent Ford expects to deliver fatter profits and higher margins in the future. And that’s precisely what shareholders and industry analysts say they want to see from Ford, whose share price comparatively lags those of its peers.

More: Detroit must gear up for Ford’s Corktown boom

The building would be restored and reimagined to attract new employees to help develop the mobility, autonomy and electrification technologies considered the biggest disruptors to the auto industry since Henry Ford began making Model Ts for the masses.

That magnet isn’t intended to pull Ford from Dearborn. All but Ford’s electrification and autonomous driving teams would remain in Dearborn and occupy its sprawling sites. An estimated $1 billion campus redesign there is slated to be completed by the mid-2020s.

“This is our home,” Bill Ford Jr. said. “We’re not leaving by any means. By the end of this we’ll have a large multiple of employees in Dearborn versus Detroit. This is in no way abandoning Dearborn.”

Ford’s plan for the depot is evolving. Bill Ford Jr. envisions the soaring lobby of the train station, its Guastavino-tile ceiling hovering almost 55 feet above the floor, to be a bustling public space akin to San Francisco’s Ferry Building Marketplace.

More: Finley: Sell train station or tear it down

More: Detroit must gear up for Ford’s Corktown boom

The ground floor lobby of the 18-story, 500,000-square-foot building would be open to the public. That space could house markets, coffee shops, restaurants, retail and gathering spaces. A hotel and residential space are not being ruled out.

“One thing I don’t want to do is take a beautiful building and put something that’s garish on there,” Bill Ford Jr. said. “Not that the Blue Oval is garish, but I wouldn’t want to put some giant modern emblem up that just didn’t fit. We don’t want to be isolated, and we don’t want to be seen as taking over the community by any means.”

Part of that community involvement means asking Dan Gilbert’s Bedrock Detroit, Peter Cummings’ The Platform and Redico Management Inc., among other developers, to scout and undertake other Corktown projects that would further the revitalization of the historic neighborhood.

The automaker also is considering erecting a public parking garage on parcels of land acquired along the I-75 service drive and north of Michigan Avenue. That could answer parking concerns for the Detroit Police Athletic League, which recently opened its youth sports stadium on the old Tiger Stadium site, and provide general parking problems in the hip Corktown neighborhood.

“This wouldn’t necessarily be Ford-ville,” Ford Land Co. CEO Dave Dubensky said in an interview. “This could be something bigger than that. We don’t necessarily have to own (everything). I’m in it to fulfill the vision of Bill and the Ford Motor Company. If I can invite others in, and they can actually bring their thinking to the space as well, it’s all better.”

How they plan to do it

Reviving the depot and establishing Corktown in a potential mobility corridor would require tax incentives to renovate the building at its heart, Bill Ford Jr. said.

The company, pointing to previous projects in the city, expects roughly a third of the up-front renovation costs would be covered by tax breaks for restoring the historic depot. Ford, the city and the former owners of the building have declined comment on how much Ford paid for the station, or how much Ford will spend on the renovation.

Bill Ford Jr., Dubensky and other ranking officials declined to discuss those figures. But the executive chairman did concede that the expected cost of restoring the depot   “dwarfs the purchase price.”

Part of Dubensky’s job during the months-long negotiation was to be Bill Ford’s “sanity check.” Over a roughly seven-month period, Dubensky met with Moroun and the president of the Moroun family’s Crown Enterprises Inc., Michael Samhat, at area restaurants to discuss a possible sale. Bill Ford Jr. met with Moroun in Ford’s Dearborn office, from which Ford can see the western flank of the depot.

Between early 2018 and the May 22 closing, Dubensky’s team tested everything from the soil to the facade of the station to determine an estimated cost of a renovation. The Ford Land team did financial modeling to determine if the investment was feasible with future market conditions.

“I didn’t want this to be an emotional purchase,” Bill Ford Jr. said. “This had to be the right business decision. I couldn’t be happier. But was I prepared to walk away if it was the wrong deal? Yes, I was.”

On a hot June afternoon, the guy whose name is on Dearborn’s Glass House pulled up to the train station in his navy blue Mustang GT convertible. He got out and walked into the station that would be the biggest project of his career, if only for what it represents:

A potentially sustainable revival of Detroit, the restoration of an authentic witness to the 20th-century history of Detroit. It would be bigger than the deal to build Ford Field downtown, he said, bigger than the renovation of the Rouge complex.

“Isn’t this just incredible?” Bill Ford Jr. said, standing on the concourse of Michigan Central Depot as crews set lights and erected scaffolding in a space that witnessed the Great Depression, soldiers heading off to war and welcoming home the fortunate who returned. 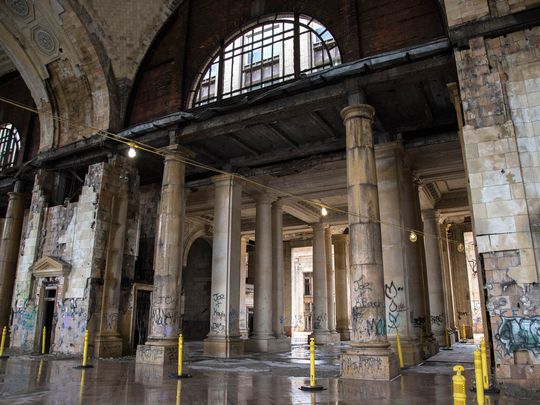 The company plans to announce officially its plans for Corktown and the station at 11 a.m. Tuesday followed by a party in Roosevelt Park north of the long-vacant building. Ford will also host an “open house” Friday, June 22 through Sunday, June 24 to take the public inside the station before renovations begin.

When renovations are complete, the public would have access to 300,000 square feet on the ground floor of the station and other Corktown properties. Roughly 2,500 Ford employees and another 2,500 partner employees would occupy the remaining 900,000 square feet come 2022.

The Corktown site would give Ford’s teams access to a true urban landscape to test autonomous technology, and how those vehicles would need to communicate with traffic systems, delivery destinations and other infrastructure.

“This is kind of the test track of the future,” said Hackett, Ford’s CEO. Ford employees will have to solve mobility problems for themselves to more efficiently travel to Dearborn and back, for example, and how vehicles could interact with infrastructure along that route.

“This is an exclamation point” for Detroit’s resurgence, Bill Ford Jr. said. “Ford and Detroit have seen good times, we’ve seen bad times, and this is a tough region. We’ve been through it together. This is an authentic move for the city and for us. Frankly, it’s where it all began.”

While the public would 300,000-square-feet on the ground floor of the station and other Corktown properties, 2,500 Ford employees and 2,5000 partner employees would occupy the remaining 900,000 square feet come 2022. This is the top floor.
DAVID GURALNICK, THE DETROIT NEWS